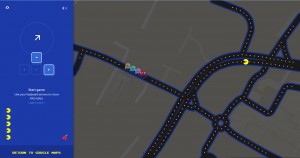 Google have just rolled out their traditional April Fools' addition to their Maps service. We particularly like with what they've done this year. They've turned the whole world into a Pacman game!

To try this yourself, just open up Google Maps:

Centre the map on the area you'd like to turn into a Pacman game, then click the Pacman icon in the bottom left. Colour us impressed!

This is by no means the first time that Google have pulled a stunt like this. They have become famous for their April Fools' pranks.

Just looking at the Maps service alone, last year, they added a Pokemon challenge. In 2013, they implemented a Treasure Hunt Challenge, which rendered the map in the style of a treasure map. 2012 saw them creating an 8-bit version of the map which made it look like it had been created with an old fashioned NES console. Going back another year, they included various mythical creatures that could be viewed in 3D at various points on the globe when viewing in Google Earth mode.

Their japes aren't limited just to the maps feature either. In 2013, Youtube (which by that point was owned by Google) claimed that they would no longer be accepting new video uploads. Instead, they would launch a competition to find the best video, and everything else would be deleted.

In 2011, they announced that the notorious font "Comic Sans" would become the default font on all products.

In 2008, they delcared they would be adding a "Scratch and Sniff" feature into Google Books. Users were asked to "place their nose near the monitor and press 'Go'". This would "Load odors".

These are just the tip of the iceberg. Google have created hundreds of these pranks over the years, along with some more general 'Easter Eggs' that can be found throughout their range. There's a complete (known) list you can have a look at on Wikipedia: