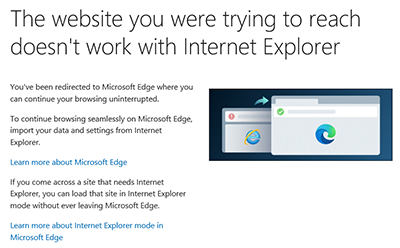 A couple of months ago, we reported that Microsoft will be dropping support for their ancient Internet Explorer web browser in most of their applications over the coming year. Not satisfied with this major nudge for those still sticking with this antique app, they will soon be going one step further.

There is now a list of over 1,000 sites that you will now see a prompt alerting you to the fact that it doesn't work in Internet Explorer, and Edge will automatically be opened. It's possible to see this list of sites here. It includes sites such as Yahoo Mail, Google Drive and Twitter. It is likely this list will grow over time.

While use of Internet Explorer is now very low (just over 1% compared to other browsers), there are still a number of holdouts. Some will be people that just don't like change, but most will likely either be companies that invested in systems a long time ago that only work with the legacy features in Internet Explorer, or companies that deal with 3rd parties with a similar problem. However, Microsoft's Edge browser does have an Internet Explorer compatibility mode that should, in theory, allow these sites to continue working.

While we didn't previously recommend Microsoft's Edge browser in its previous incarnation, the rewritten version that shares much of its code with Google's Chrome browser is much improved. While optional for a while, this updated version of the browser is now compulsory as of the Windows 10 October 2020 feature update that is now rolling out around the world. In something of a first for a Microsoft browser, it can now even be run on Linux systems. How times change...